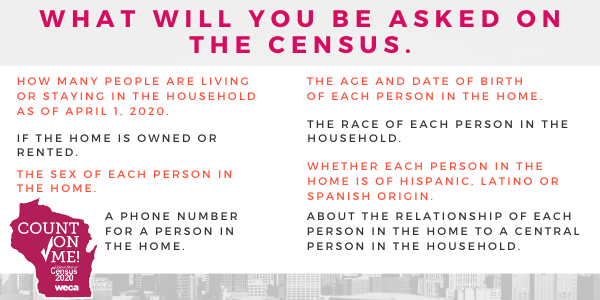 Between March 12 and 20, about 143 million households in the country will receive an initial invitation to respond to the 2020 Census. All invitations will include a short phrase in English and 12 additional languages inviting people to respond online or by phone in their language. In areas where 20 percent or more of the households need Spanish assistance, the invitations will be in both English and Spanish. If you live in an area that has been identified by the Census Bureau as having low internet usage or subscriptions, or high populations of people over 65, the invitation will come with a paper questionnaire.

Reminders will also be mailed out in April and then paper questionnaires will be sent out to all non-responders. Census Takers will be conducting follow up in person – within your communities – in April through July. Census takers may responsible for recording up to 40% of the count. (By the way, if you are interested helping out, the Census Bureau is hiring for temporary positions with a lot of flexibility.  More information here.) The final report will be delivered to the President and Congress in December 2020.

People often have the idea that the Census form is pages long, will take forever to complete, and asks really detailed questions. This couldn’t be further from the truth.

Here are sample 2020 Census forms so that you can review the questions yourself, to see what IS and IS NOT on the form.  SAMPLE CENSUS FORMS.  (in English and Spanish)

While above form is fairly basic, you may be one of the households asked to participate other surveys by the Census Bureau now and over the upcoming years. The Census Bureau does other surveys to gather info on employment, consumer expenditures, health, housing, and other topics. These surveys are more detailed. You are not required to participate in the additional surveys but know that your response will have significant impact on decisions being made in your communities.