Where are we in the federal budget process?
It’s complicated. Let’s start with what is known for certain. Fiscal year 2021 ends September 30, which means that either Congress needs to approve annual appropriations bills for FY2022 before September 30 or enact an extension – a continuing resolution for some period of time (e.g., a few weeks, a few months, etc.). The House passed its version of the FY2022 Labor, HHS, and Education Appropriations bill on July 29 by a party-line vote of 219-207. More on that below. The Senate Appropriations Committee is not expected to work on its version of this bill until sometime in the fall.

There’s lots of news about an infrastructure bill and some big $3.5 trillion package. What about those bills? How are they related (or not)?
In the spring, President Biden proposed an infrastructure package (traditionally roads, bridges, etc.) and a care-giving investment package (e.g., it is this second package that could potentially contain funding for child care and preschool). The President proposed $225 billion for child care and $200 billion for universal preschool. There has been lots of discussion about the size of these packages and how they would be paid for (and also the content).

At this point, a bipartisan group in the Senate has come to agreement on a 10-year $1.2 trillion infrastructure bill ($550 billion in new spending for traditional road, bridge, and other infrastructure investments). This bill is called the Infrastructure Investment and Jobs Act and the text of the bill was released yesterday – more than 2,700 pages. Senators are now reviewing it and the measure is expected to be debated on the Senate floor this week.  Majority Leader Schumer has predicted it will pass late this week (although with 2,700 pages, anything could happen).

The budget resolution (which carries reconciliation instructions) could pass the Senate potentially the week of August 9.  Majority Leader Schumer has said he wants to pass the infrastructure bill this week and the budget resolution next week.  If the infrastructure bill passes, the road is clear to consider the budget resolution. However, it’s a bit unclear about the spending level that will be included in the budget resolution. Senate Budget Chairman Sanders is pushing for $3.5 trillion. Some moderate Senate Democrats are saying that they can’t support spending at that level. It’s unclear whether the level of spending in the budget resolution will be reduced in order to garner the 50 votes to pass or whether it will pass at $3.5 trillion with some fuzzy offsets to be determined later. The measure is a blueprint, so it is unlikely to include details. What is certain is that the bill will need to be supported by all 50 Democrats since Republicans are likely to oppose it.

Will the House amend the infrastructure bill? Or the budget resolution? Unclear. But, if they do, the measures would have to go back to the Senate for passage (if altered). Prospects on that? Unclear. Just as in the Senate, the progressives want a $3.5 trillion budget resolution and more moderate Democrats want a lower level of spending.  Therefore, at this point, all eyes are on the Senate before the House determines floor strategy for passage.

Where do the FY2022 appropriations bills fit in? Are they connected to the infrastructure bill or budget resolution?
It’s unclear what will happen in the fall. While the House has passed it’s FY2022 Labor, HHS, Education bill (with funding increases described below for early learning programs), a budget resolution could alter the top-level spending allowed for FY2022. Spending could be higher or lower.  What is likely is that there will be some level of budget negotiations in the fall that will set spending for FY2022 and beyond utilizing annual appropriations bills (or a continuing resolution) as well as a reconciliation bill (that could increase investments significantly through offsets such as taxes on individuals earning more than $400,000 or recouping unobligated COVID funding to some extent from some yet to be named accounts).  For example, unused unemployment compensation funding.

So, are there big increases for early learning programs in the House-passed FY2022 Labor, HHS, and Education Appropriations bill? How would child care and preschool be expanded?
Pre-COVID, the increases in the FY2022 annual appropriations bill for early learning would have been seen as large.  They are large, but not huge compared to the $53 billion increase in supplemental child care funding provided in the CARES Act, the CRSSA COVID Relief bill (December 2020), and the American Rescue Plan in the past 16 months.  See the House passed increases for early learning programs provided in the FY2022 annual appropriations bill below highlighted in yellow. For consideration of President Biden’s $225 billion for child care and $200 billion for universal preschool, passage of a reconciliation bill will be needed (where such investments would be included to the extent the bill moves forward). Unlike the budget resolution, which is an internal budget management guide (and does not need to become law), the reconciliation bill must be approved by the House and Senate and signed into law by the President. 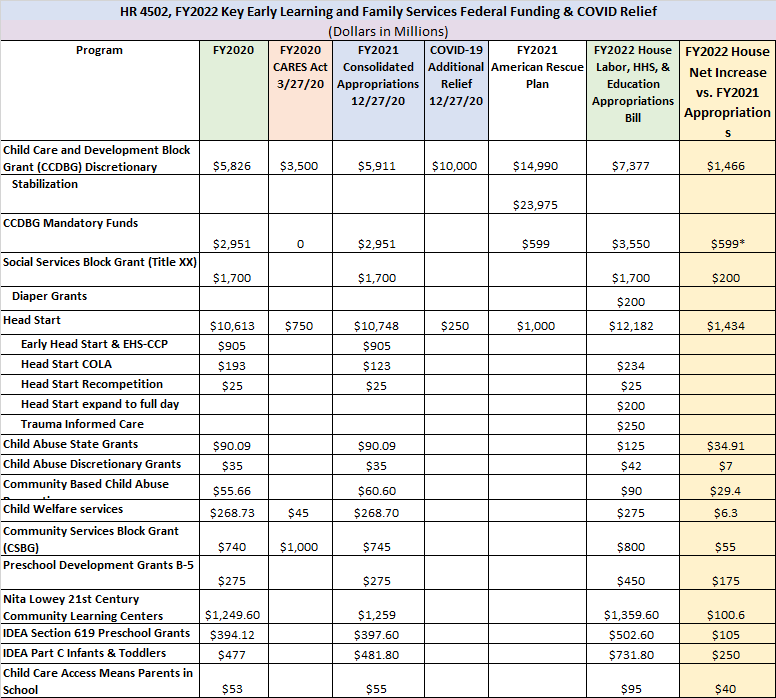 What’s the bottom line?
It’s likely to be a busy fall. In odd-numbered years, Congress has historically been in session until Thanksgiving or Christmas.  Expect the same this year.