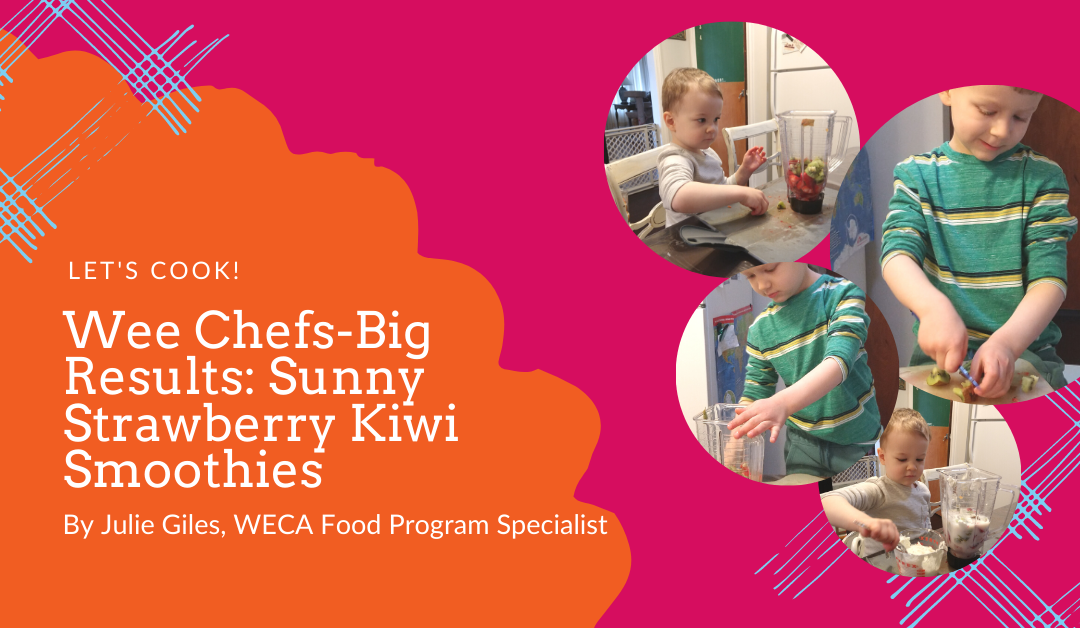 Our recipe for March was Choose your Own Smoothie (p. 67).

My cute and savvy kitchen team whipped up Sunny Strawberry Kiwi Smoothies on a cold and rainy March morning.

You’ll be shocked – or not! – that I chose to make some substitutions: Instead of low-fat vanilla yogurt, we used whole milk plain Greek yogurt. By doing so, we met the sugar limits for yogurt on the CACFP, and our smoothie was thicker and richer.

We used 1% milk rather than skim, as it is what we drink, and I felt the extra fat might also help to produce a bit richer final product.

The boys worked hard slicing and chopping the already-washed fruit. Since my blender has limited power, the pieces of fruit needed to be small. The boys were good sports about their temporarily strawberry-dyed pink fingers! In hindsight, I should have outfitted my chefs in aprons, to prevent strawberry-dyed clothing (which I pre-treated so that that, too, would be temporary.)

We all love vanilla, so we agreed as a team to add a heaping teaspoon full. I was glad that we did, as our smoothie was not sweet, although still very fruity and tasty. The vanilla yogurt the recipe originally called for probably resulted in a much sweeter smoothie, but exceeding the 23g per 6 oz CACFP mandate for yogurt was something, of course, I was not willing to do. If we make this smoothie recipe again, I could suggest to my kitchen crew that we add a bit more vanilla or a hearty sprinkle of cinnamon or nutmeg to lend some additional sweetness.

Our Sunny Strawberry Kiwi Smoothie didn’t bring out the sun, but we were busy and happy in my kitchen slicing, dicing, whipping and concocting a tasty and healthy beverage to have with lunch (in addition to our serving of 1% milk.) And, we all had second helpings!