The Power of Black Storytelling in Preschool Environments 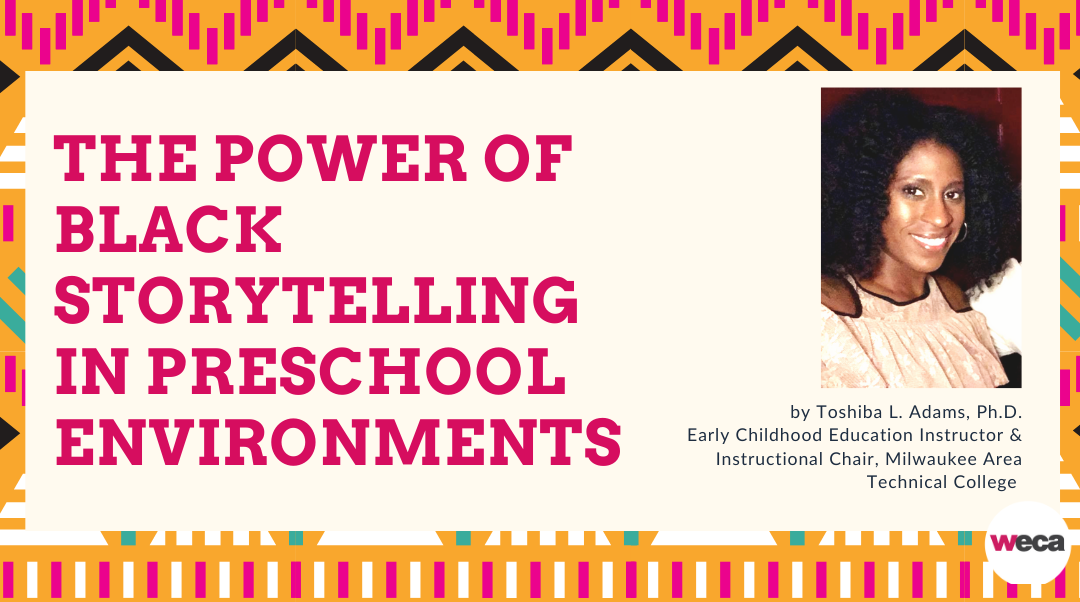 As we approached Black History Month, I took a moment to reflect on my early schooling experiences.  As a Black child who attended predominantly White k-12 schools, I am unable to recall any school-wide celebrations of Black history. What I do recall is being taught by primarily White female teachers.  While I’m certain that their actions were well intended, their teaching practices lacked diversity.  From an early age, I was constantly reminded of the perpetuation of white privilege in my educational settings.  This notion of privilege was evident through my teacher’s mainstream selection of reading materials, guest speakers, field trips and exploration of historical figures who did not share my racial background.  I suffered socially, emotionally, and academically while navigating these early education environments.  Reflecting back, I now realize that my developmental needs were not being met, in part, due to the mismatch noted between my racial identity and the school’s curriculum. Where were the images of Black people in my early education setting? What were their stories?

The Danger of the Single Story
A few years ago, I came across a TED Talk video titled, “The Danger of the Single Story”.  In this video, Chimamanda Ngozi Adichie discusses the danger of accepting one-dimensional stories about groups of individuals.  Stories that are typically unfounded but nonetheless have the power to perpetuate stereotypes and prejudices that lead to societal injustices.  I’m sure you have heard some of these stories – you know, the stories that perceive Blacks as lazy, Mexicans as illegal immigrants, women as unfit leaders because they are too emotional, and individuals deriving from low-income backgrounds as those who lack ambition or potential to succeed.  Unfortunately, this somber list goes on and on.

These types of deficit-based stories are harmful because they perpetuate disadvantages, particularly for low-income and people of color.  Ultimately, negative stories about black and brown communities serve to normalize ideologies of whiteness while simultaneously regarding individuals from minority racial groups as “others”.

The Single Story and Preschool Education
Racialized stereotypes extend into preschool environments and are equally harmful to young Black children.  In these settings, Black children are often stereotyped as defiant and less capable learners.  In 2017, studies reported that Black preschool-aged children were 3.6 times more likely to be suspended and expelled than White preschool-age children (Trent et al., 2019).  Although Black children only comprised 19 percent of preschool enrollment in 2015-2016, they accounted for 47 percent of children who received one or more out of school suspensions (The Center for American Progress, 2017). In a report disseminated by the Yale Child Study Center (2016), Dr. Walter Gilliam and his colleagues explored the implicit biases of early education teachers regarding their discipline measures and found that preschool teachers predominantly observed Black children because they expected them to misbehave, especially Black boys. As illustrated in the literature, these single stories about Black children are dangerous because they lead them to miss pertinent early learning experiences that support their holistic development and long-term success into adulthood.

Changing the Narrative through Black Storytelling
As early education professionals, we have the ability to change the mainstream narrative about the Black community by integrating counterstories within our curriculum that teach young children about historical and contemporary Black icons – young and senior – who possess incredible talents and serve as major contributors to our American society.

Since the beginning of time, storytelling has been an important event in the Black community.  Through storytelling and narratives, Black history is shared and life lessons are learned.  Virginia Hamilton, author of The People Could Fly – a children’s book of Black stories – explains how storytelling was the first opportunity for Black people to represent themselves as anything besides property. For the Black community, storytelling roots our collective experience; they validate our historical and contemporary lived experiences and declare that we matter.

In preschool settings, it is important for children to be exposed to positive stories about Black people.  For example, stories about Garrett Morgan, a Black man who invented the traffic light in 1923 during an era of overt racism. Stories about former President Barack Obama, a Black man who managed to resist racial and social barriers to become the first Black president of the United States.  Stories about former Senator Kamala Harris, the daughter of Indian and Jamaican emigrants, who graduated from Howard University – a historically Black institution – and elevated to the position of Vice President of the United States. Stories about a 22-year-old poet named Amanda Gorman – a young Black woman who was labeled as a special needs child – yet, possessed the talent and ability to graduate from Harvard University, become the first person to be named national youth Poet Laureate, publisher of an extension poetry collection and presenter at the 2021 presidential inauguration.

Storytelling can also be expressed through a selection of culturally relevant books about Black people and their unique culture.  As a child, I would have been delighted to find racially affirming books in my early education classroom like, I Love My Hair by Natasha Tarpley, the story of a girl named Keyana who discovers the beauty of her unique Black hair texture.  Or, Natasha Tarpley’s Bippity Bop Barbershop book that depicts the Black barbershop as a garden where Black relationships grow within their community.  The exploration of positive Black cultured books is important for all children because it can have a positive impact on their overall development.  Particular to Black children, their racial identity is enhanced as they encounter stories that affirm who they are as a member of their racial group.  Black stories offer Black children an opportunity to form mental connections with the narrative being told, to see a reflection of themselves in stories told from the perspective of those with the lived experience.

For non-Black children, these stories provide a window into the Black culture and acceptance of differences.  They learn about Black music, dance, traditions, food, language and history.  These lessons are valuable to non-Black children because it reduces the cultural divide and allows young children to establish healthy social relationships as they learn to interact with one another in non-biased ways.

Below, I have shared a list of websites that detail children’s books written by Black authors.  I hope you find these sites resourceful as you plan culturally affirming lessons for young learners.